Okay, big week for me.

You can now buy the new, improved version of Stuck Outside of Phoenix at my Web site.

Hey, it's the right color! Thanks, Brian!

Why you should buy and read Stuck Outside of Phoenix 2.0 if you bought and read Ghost Notes:

Because you'll learn so much more about Hote: what bands he's played in, what his favorite fast food restaurant is, where he likes to get drunk. You'll also learn about Hote's first big gig, be privy to a formative meeting with Digs Ven at Richmond's, and witness the first truly classy lay of Hote's life!

Why you should buy and read Stuck Outside of Phoenix 2.0 if you've already bought and read the previous version:

Because this is a new, improved version of the Tempe rock lit classic; it's been re-edited, comes with a new cover design, and will nicely round out your collection of Defunct merch.

Why you should buy and read Stuck Outside of Phoenix if you've never read anything by me:

Because it's the first in a series of at least three easy, breezy, fun novels, which means you get to start at the beginning! (Remember when Star Wars started at Episode Four? What the hell was that all about?) And Novel Three, which is called Badge, is coming together quickly. Climb aboard the Hote train now!

What to do if you want a new, improved Stuck but don't want to pay for shipping:

You can buy one at any of the events listed on my events page, starting with the 2nd Annual Laying Down the Law Show on August 9th. 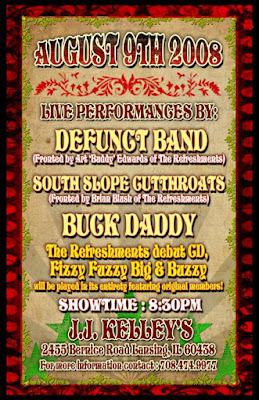 I'll have Stucks and Ghosts and Songs from Memorys at each event!

What to do if you like the pink cover better:

See you all at JJ Kelley's on Saturday!

Buy Stuck Outside of Phoenix

Email ThisBlogThis!Share to TwitterShare to FacebookShare to Pinterest
Labels: Stuck Outside of Phoenix 2, The Laying Down the Law Show