In an effort to pump the Chicago Martyrs’ gig on Saturday, June 9th, for which tickets are now on sale at (800) 594-TIXX , I will dedicate as many blogs as possible between now and then to topics related to the Refreshments.

Here are some more numbers graciously supplied by John, our friend in radio with Soundscan access. Take it away, John.

Interesting that NYC is number 2, and that Minneapolis, DC and the Bay Area made the Bottle list over Atlanta, Detroit and Philly, three from the Fizzy top ten. If I had to guess, I'd say some of these markets gave "Good Year" a few extra spins back in the day. At a total of 58k records sold, only a few hundred copies separate one city from another.

Fizzy was released the same week as five or six other Mercury acts marketed to alternative radio. As I remember, most of those acts sold somewhere between 50 and 500 copies that first week. The Refreshments were the big winners at over 2,800, and that led the label to continue to work the band at radio, which led to all of our later success. From this, you could reasonably argue that all of the band’s national success was dictated by that first week of Fizzy sales--in other words, by the buying power of our grass roots fans from well before our record deal, mostly in the Phoenix area (If I remember correctly, 2100 of those 2800 were sold in Phoenix. John?) They were the reason we got serious consideration early on, which is the only way we had a chance.

And I also remember that month or two when we sold 10k a week. I don’t think I slept from June to August 1996.

And since I have way too much free time at work today, here are the top 10 stations that led the nation in spins on Banditos for 2006 only:

This list seems all over the place. Phoenix I understand, but of the rest of those places I only remember playing Las Vegas (Blush would’ve probably quit the band if we hadn’t), Cleveland and Tulsa. (Anyone out there from Lafayette, Huntsville, or Monmouth?)

Tune in next week for the last Refreshments blog before the law gets laid in Chicago. Hey, I’ll even let you pick the topic! Add a comment to this post stating what you’d like me to write about next week, and I promise to give it serious consideration.

Getting ready to rock,

In an effort to pump the Chicago Martyrs’ gig on Saturday, June 9th, for which tickets are now on sale at (800) 594-TIXX , I will dedicate as many blogs as possible between now and then to topics related to the Refreshments.

Remember my post from a couple of months ago where I estimated possible sales figures for the Refreshments’ first album, Fizzy, Fuzzy, Big & Buzzy? Well, it turns out we have some up-to-date numbers for you.

Enter John, a radio man who not so long ago was the mid-day music director of KMXP in Phoenix. He read my blog and, after abusing his Soundscan privileges, gave me the skinny on how many copies of Fizzy have sold. Here’s what he had to say.

I was reading your blog which discussed the number of copies of Fizzy that were sold. I logged onto Soundscan out of curiosity, and it shows 374,790 sold to date, with 982 being sold in 2007. (Of that 374,790 would you believe that 42,550 were cassettes?!?) The total number shipped could be higher, but only the label would know for sure. The top 10 markets in which FFB&B sold are (in order):

Back when I used to be privy to these things, Soundscan was commonly thought of as representing at least 90 percent of all records sold in the U.S. (I bet it’s gone up since then.) In other words, we used to guess that up to ten percent of records sold weren’t “soundscanned.” They were sold at Mom & Pop record stores, which were record stores not owned by chains or corporations but by actual people. (I know, I know. It sounds crazy.)

So, if Fizzy soundscanned about 375,000 copies--and that’s not even all the copies that have sold--my estimate of 400,000 copies of Fizzy shipped (Remember, gold record status is measured by that vague, outdated number of records shipped) probably is a bit modest. Considering all of this, I’d guess we’re somewhere closer to 420k.

But again, only Mercury Records knows for sure how many copies of Fizzy have shipped.

However, my estimates for the current number of copies of Fizzy sold per week and per year were a bit off. My original source had it selling 100 records per week, which comes to about 5000 records per year. According to John, who compiled all of these numbers at the end of April, Fizzy has sold 982 copies in 2007, which comes to something more like 55-60 records a week and 3000 per year. (My original source may have been exaggerating, or the number could’ve gone down since then.)

At this rate, no gold record is eminent, but hey, who gets into this game for gold records, right?

Compare that to John’s current list, and there’s not much change. (Sacto fell of; Philly came on.)

Next week, More numbers fun with Bottle and “Banditos.”

So, there I was, last July, minding my own business, when I got an email from a long lost friend from my days in Moline, IL, a guitarist named Bret Hartley.

Many of you have been through this. An old friend finds you on the Internet. You exchange emails, crack jokes, remember the good old days, talk about how you’d like to catch up sometime, but it never happens.

That’s usually how it goes. That’s not how it went with Bret and me.

It turns out Bret’s had a great deal of success since we played together in our band (the Varietles, Moline, IL’s only Replacements wannabe band circa 1989). 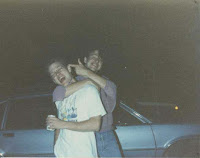 It was good to hear from Bret. We’d always gotten along, and we’d always spoken the same language when it came to music. I suggested, off-handedly, we should play together again, and asked if he’d like to add some guitar to a song I’d been recording at home, a song called “Riverboat Captain.”

“Are you serious?” he said.

The next thing I knew, Bret was setting up recording time at an Atlanta studio, booking a drummer and an engineer. He took care of everything, and I gave him “Riverboat Captain” to do with what he would. “Pretend it’s like that interior design TV show,” I said. “Here’s my bedroom. Have at it.”

In a week, I had an mp3 of “Riverboat Captain” sitting in my inbox: full band, pro guitar and drums, a clever breakdown in verse 3, and a bridge guitar lick bigger than god.

You have to understand what I gave him to work with. He got nothing from me but a snapshot of the song--creaky acoustic guitar, bass, scratch vocals, and a bad-sounding drum machine--and Bret delivered back to me and IMAX movie.

I called Bret as soon as I'd heard it.

It’ll be my solo record, and it’ll be out early next year. Bret will be playing all of the guitars, producing, and mixing. I’ve written all of the songs, and I’ll be singing, playing bass, and generally throwing my weight around. Drummer Kevin Leahy, who’s toured with the likes of Shawn Mullins and the BoDeans, among others, and who played on “Riverboat Captain,” will continue his stellar work on the rest of the songs, and it will all go down at the Ben Price owned and operated Studilaroche and Bret’s home studio this year. Drums start May 21st.

I’m not kidding. This is happening. Part of me has been waiting a decade for it, and it’s all possible because an old friend looked me up. Gotta love the Internet.

So, how does this relate to the The Chicago Martyrs' Show on Saturday, June 9th? I’ll be playing many of the songs that will be on the forthcoming CD at this show. If you attend, you’ll be one of the first to hear them. So come for the millions of great reasons already stated, but also get a sneak peak--perhaps the only sneak peak--of the material for my first solo effort. I hope you like it.

Things are developing rapidly with our Chicago Martyrs’ gig on Saturday, June 9th, for which tickets are now on sale at (800) 594-TIXX . Let me touch on a few items that may have slid by without my mentioning them.

First of all, it’s called The Laying Down the Law Show. How cool is that?

Secondly, there are four acts on the bill.

River Oaks will be anchoring the show, a local Chicago band whose music reminds me of Hedwig and the Angry Inch--and that’s a compliment! Come prepared to rock all night.

A Set of Refreshments Songs with Buck Daddy and Art “Buddy” Edwards on Bass. We’re excited to bring you some Refreshments tunes you may not be expecting. Think deep cuts.

Buck Daddy will be performing--and releasing their new CD at the show! Randy’s been talking about it for months, with that tone in his voice. (Ah, I know it well!)

And don’t forget Art’s Acoustic Set, with a new twist. My set will feature a special guest appearance by Jim “Jimmi G” Gerke , who will be coming all the way from Phoenix to join me for a semi-acoustic version of a *Stuck Outside of Phoenix* classic.

And there’s one more very important detail about my acoustic set…but you’ll have to wait until next week to hear about it. This one truly deserves its own post.

So, I’m digging around in my closet a few months ago, and I come across a handful of Refreshments stickers. You know the one I’m talking about, oval, purple, with a gold and white Refreshments logo shooshed across the middle. So, I start thinking: what’s the best way to get these stickers into the hands of people who really want them? Here’s what I came up with.

The first twenty people to buy a copy of Stuck Outside of Phoenix at The Laying Down the Law Show will also get a complimentary Refreshments “bookmark." How’s that sound? Now, there’s a limited supply of these, so come early, buy a book, get a free a “bookmark," and catch a bitchin’ acoustic set by yours truly! Show starts at 8:30.

And tune in here next week for a big, big, big announcement from Budland, one that will make a free sticker seem, well, silly.