Art Edwards to let Buddy Out of the Cage for One Night In AZ in February!!!

One of the highlights of 2018 was watching the formation and ascendent star of Murphy's Outlaw.

This band consists of three of my best friends, two of which are former Refreshments and one a guy who was the lead singer of all of my AZ bands not the Refreshments. Despite the bass position of this band being more than ably manned by Mitch Cole, I couldn't help but watch on from Oregon and ... well, you know.

It seems my wish is being granted as I am officially scheduled to sit in for one night with Murphy's Outlaw on Friday, February 22nd at Scottsdale, Arizona's ROCK BAR.

I'm already starting to get a little geeky over this.

Brian Blush asked me if I have any photos that might serve as appropriate. It took some digging, but I found an outtake from the Refreshments' first "photo shoot," the story of which you might find amusing.

In the summer of 1994, the Refreshments had our first LP Wheelie in the can. One problem: we didn't have a band photo.

You know, you're a band, and you want some cool, professional photo to put inside your CD. It's something bands do.

So, what do you do when you want a nice, professional photo of yourself? Why, go to Sears, of course!

As luck would have it, Sears had a sale, and the four of us put on our Sunday best and went to the Sears on (I believe) 44th and Camelback and threw down the credit card for the deluxe package.

It's probably one of my favorite memories of being in the band.

The young lady doing the shooting that day caught right on. "Which background would you like?"

"What are our choices?"

She started pulling down these tacky photo backgrounds, but I assure you, none was more tacky than the "space age" one that clearly dated from Star Wars time.

So, we got all cozy--our little AZ rock and roll family getting its picture taken--and we came home that day (or back then probably had to go back and pick up a week later) with our photos.

The best one went into the inner sleeve of Wheelie. (I'm listening to Wheelie right now, incidentally. "Don't Wanna Know.") The second was a kind of outtake that found its way into some press stuff back in the day. Here's a partial. 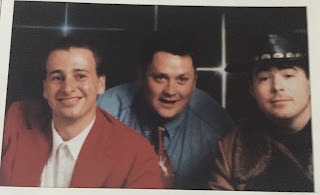 My Review of THE MELODY by Jim Crace up at Book and Film Globe!!!

I've been waiting for a site like Book and Film Globe to pop up for some time. It features fun, smart reviews of books and films by authors that aren't obsessed with playing fair or who they might offend. Bluntness has its virtues--or maybe not, but it's fun anyway.

I was thrilled to have the site accept my review of the latest novel by Jim Crace called The Melody. Not a rock novel, per se, but there is a singer in it, and this guy can write. Come take a peek.

Posted by Art Edwards at 4:29 PM No comments: