Last week I wrote an essay for the The Nervous Breakdown that was pretty much about my envy of Steve Almond, someone whose work I like and respect, and who also seems to get my goat.

I believe this is a common trait of writers. We spend a great deal of time in our heads, dreaming up ideal worlds. Often, we dream of an ideal world that involves our success as writers, and there's nothing worse than someone coming along and playing a role in real life that you've concocted for yourself in your head.

Damn it, that was mine.

Well, there is an upside to envy, as a few have pointed out since my essay was published last week. Envy, they said, is a terrific motivator. It makes the writer redouble her efforts to squash the puss out of the interloper, and the only way to do that is to out-write him.

So, there is something to be said for envy.

But I still think, in a different way, envy is detrimental to the support and fostering of good writing.

Let's say some guy like Steve Almond comes along in the year 2000 or so and writes a book of short stories called--oh, I don't know--My Life in Heavy Metal. Then another writer--let's say me--hears about this book, sees the cover, notices the publisher, reads the reviews, and is struck by a massive wave of envy for this book, this writer, this success. What would this writer--me, in this hypothetical case--do?

Well, I'd get to work--which is what I've been doing for the past decade or so--in an effort to show Mr. Perfect he's not so Mr. Perfect after all.

Well, I wouldn't buy his book, that's for sure.

And that's fine. This is America. No one has to support anything they don't want to support, and reading My Life in Heavy Metal at its release might have been counter-productive for me. Almond's prose might have been so blindingly good at the time it could have overwhelmed me, pushed me away from writing toward some other preoccupation, perhaps never to return. Skipping it might have been the exact right thing to do.

So, where does that leave us?

That leaves us with writers doing exemplary work and not selling as many books as they would otherwise because of the green-eyed monster.

Now, am I proposing we eradicate envy in the name of book sales? No. A more imposing windmill has never been chased, and I probably wouldn't want to get rid of it even if I could.

I am suggesting we become more aware of the role envy plays in our decisions to support or not support other writers, to read or not read others' works, and what the likely outcome of this envy is for the future of good writing. Because in the end, we want to support those who merit it. If for no other reason, it might be us someday.

New Blog at the Nervous Breakdown

Hey, I have a new blog up at the Nervous Breakdown. It's called, "Steve Almond, Hardbacks, and the Green-Eyed Monster." Let me know what you think.

And now, ladies and gentlemen, Journey.

I always wanted to lead off for Journey.

I am now a contributing writer at The Nervous Breakdown, which is an online pub you should be reading. My first TNB post is up today, and it's called "Ten ways to get Thrown out of Wilco." I hope you dig it, and I hope you comment on it.

TNB is one of those sites I follow regularly. It sort of represents my 21st century way of reading periodicals. The latest edition is always there for me online. I sign on when I want, read what I want, and I don't have to worry about the paper version finding its way into the recycle bin when I'm done.

Literary magazines aside, I can't remember the last time I paid for the print version of a magazine or newspaper. I might flip through one at a bookstore, and every time I get my oil changed they force a USA Today on me. But pay for a copy of a magazine from the rack? Doesn't happen. Buy a newspaper from the corner kiosk? Nope. Subscribe to a commercial magazine, even an excellent one? Probably not.

This runs completely counter to my reading habits with book-length stuff, where I won't accept any sort of electronic intrusion. I only want to look at a screen for so many hours of the day. The computer can't have everything.

Also, when reading something book-length, I don't want distraction, which is so easy on a computer.

See what I mean?

But what about you? What do you choose to read: print versions of magazines and newspapers? Electronic versions? Some combination thereof?

The New Yorker dishes on its own issues with its blog/web presence here. They wrestle with being the New Yorker and being in a world where the Internet is an important place to promote your wares. Namely, they're concerned about losing what it is that makes them great--"excellence, polish, depth"--while generating hits displaying pictures of people's pets dressed as literary characters. 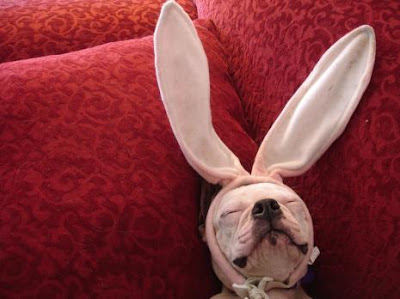 (Poppy, as the Velveteen Rabbit, from the children’s classic of the same name by Margery Williams.)
Awww.

I'm sure I'm not alone in this separation. I'm of a generation that came up before the Web, and I think I value the printed word quite a bit more than the pixelated one. I love to screw around on the Web, but my real writing happens elsewhere.

The Web calls for a certain type of writing, namely the kind that keeps people from the easy distraction of the six billion other websites they have access to. I want you to stay and read, so I keep it light and fun. I'll even go cheap as necessary.

With book writing, I figure my audience has bothered to buy, or at least pick up, my book, which implies a certain amount of dedication from the get-go. I don't need to crush them with pyrotechnics. I expect them to give my prose a chance to work on them on a deeper level. That's the kind of writing I like to read, and that's the kind of attention I hope for from a reader.

But what say you? Do you draw a distinction between the way you write for the web and the way you compose your other work?

On what Device Would George Jetson Read?

Michael Shatzkin has published a four-part blog in lieu of speaking at the London Book Fair last month. Of particular interest is Part II, where he goes into what our computer/book lives might be like in 2030. (Spoiler: they'll be pretty much the same.) Here's a taste:

"We’ll access [book] files through a multiplicity of devices, which by then will really just be screens of varying descriptions with online access. There will be big ones that hang on our walls for us to watch movies on and to put a Picasso in when we’re not watching a movie. There will be small ones, foldable ones, and ones that come in rolls where you can use whatever roll width suits your immediate purpose. With your password, you’ll be able to use my screen for your data, just as you can use my computer to get at your gmail account today. There will be screens you can write and underline on which will store your markings (to share or not, as you choose.)"

I thought about doing a poll on this issue: "In 20 years, which device do you expect you'll be reading on?" Then it hit me:

Who gives a shit?

Too often, the conversation in the digital age centers around whether we will read on an iPad, iPhone, Kindle, Nook, or some other gewgaw they haven't invented yet. But what about what we'll be reading, and how well we'll be reading? Is anyone reading Shakespeare on these devices?

Whenever I hear "iPad," "iPhone," "Kindle," "Nook," I think: fetish item. The commotion caused by these new devices is at best a publishing industry issue or, at worst, a techie issue, interesting for what it is, but in the end the ruckus only matters if the content transmitted by the device is worth our time.

Now, if any of these devices actually change the way we experience the work to the point that they help yield a greater understanding of it, then things get interesting. For example, we all know reading Shakespeare and going to see a Shakespeare play are two different experiences, engaging different parts of the brain. I'd bet most reader-types like both experiences. But what if we could read a passage from the play, then watch the passage in action, all on a device that makes such back-and-forth easy and intuitive and not too distracting? Would that be valuable? I think so.

If all that comes to fruition, I'd buy that device.

Until then, these things are bright, shiny distractions, giving us the same thing we already have with the paper version of the book, which was never really flawed in the first place.