What's this? Start at the beginning here.

The most brazen book on this list, Pollack plants his fictional doppelganger, rock critic Neal Pollack, at the scene of every important rock event in the latter half of the 20th Century, taking us from its birth with Sam Phillips in Memphis all the way to the fateful day Kurt and Courtney got married. Elvis, Iggy and Patti Smith all make appearances, but none of them are an compelling as Pollack, who rages against the dying of the rock.

Memorable Line: “They listened to Jimmie Rodgers and Fats Domino all across Texas, Elvis blowing flies off his lips, Scotty and Bill becoming progressively less famous, Neal chugging the cough syrup, staring bug-eyed out the window, singing ‘Baby, Let’s Play House’ as they steamed into New Orleans and Jacksonville and all roads leading to stardom.”

Stone Arabia is story of one reclusive rock musician—Rik, who over the course of several decades has created The Chronicles, a mish-mash of music, journalism and ephemera encompassing his made-up rock star life—told from the point of view of his younger sister Denise, who’s struggling to get down her own chronicles. Spiotta beautifully renders a rock life as it gets old, and wears thin.

Memorable Line: “She was a woman who always appeared past her peak but who actually never had a peak.”

Record store owner and music freak Rob is obsessed with understanding his life through top-five lists, all while his ex-girlfriend sleeps with his upstairs neighbor. Hornby gives us an archetypal rock character, the sullen guy a little too attached to his own pop culture opinions while real life threatens to pass him by.

Memorable Line: “Tuesday night I reorganize my record collection; I often do this at periods of emotional stress.”

The Commitments by Roddy Doyle

The Commitments is a charming story of a batch of south Dublin nobodies who manage to put together a blues act that threatens to take them to the top. No novel has ever brought the vibe of rock so convincingly to the page, or the fragility of an pop act on a quick ascension to stardom.

Memorable Line: “You made up for the lack of variety by thumping the string more often and taking your hand off the neck and putting it back a lot to make it look like you were involved in complicated work.”

Check in Friday for the #1 Greatest Rock Novel of All Time. 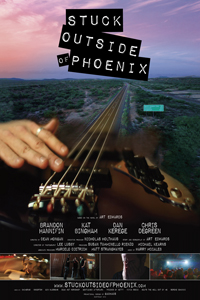