As a teenager, I wasn’t much of a reader. Sure, I read the sports page, the occasional rock biography, but reading novels meant an assignment leveled at me by a teacher. Homework. These required books—A Tale of Two Cities comes to mind—offered nothing to appeal to my adolescent fantasies, which revolved around wanting to be awesome musician, play in a band, put out records and be chased by groupies. I wanted to be a rock star. Sorry, Madame Defarge, but Gene Simmons wins every time.

In the 1980s, the vast divide between books and rock music couldn’t have been wider. I suspect pop culture was seen as a threat to the vaunted world of books, the barbarians at the gate of The Important Stuff. David Lee Roth had a thousand times more influence on the kids of my era than Holden Caulfield, much less Natty Bumpo, and this no doubt pissed off some people with elbow patches on their suit coats. I of course loved that it pissed them off.

Still, when I turned eighteen and took my first lit class in college, I fell in love with A Clockwork Orange, 1984, Slaughterhouse-Five. These seemed more rock and roll to me than rock and roll, so much so I regretted not having started my fiction life earlier. Had Sean Beaudoin’s Wise Young Fool existed back then, it might have meant an entirely different launching point for my book life.

I’m a big fan of Beaudoin’s work at the websites like The Weeklings, and his first foray into the rock novel seemed the perfect time to jump into his longer efforts. Much of Beaudoin’s verbal talent is in full force in this novel. Here, the author renders the hottest girl in protagonist Ritchie Sudden’s high school class, Ravenna Woods:

So why does she make every dude in the school apoplectic?

Why does she walk around lobbing a toaster into the collective bath tub?

There is simply no ignoring its heft and criminal perk. It’s a monument of taut Austrian hydraulics. If she were flat or fat she’d still be pretty, but no linebackers would be cutting practice trying to get to know her better. Without the badonkadonk and sheik-money strut, guys would hardly be killing themselves to score her fake digits anymore.

You’ve got to figure that level of constant objectification and wheedling hypocrisy would make a girl bitter.

And you’d be right.

Ravenna’s caught two hundred meters below the reef, unwanted sexual pressure crushing her lungs, sharks below and the bends above, nowhere to go but farther inside herself.

Any reader of Wise Young Fool will have no trouble finding such acrobatics, the next tumble of tropes never far from the last, creating a distinctly Beaudoinian joy ride.

The plight of Ritchie Sudden from discontented high schooler to rock hero to juvenile detention attendee is the raison d’etre of WYF, and Ritchie’s frustration is palpable throughout—his unresolved feelings over his sister’s death; his too-busy, too-lesbian mother; his absent father; his disgust with the folks in his class. Most effective are the times Beaudoin touches on the very human teenager behind the wise ass, like when a high school student almost chokes to death in front of Ritchie in the cafeteria.

Such trepidation is the yang to Ritchie’s sardonic edge, and Beaudoin plies his budding guitarist’s frank observations for all they’re worth. At the detention center Progressive Progress, Ritchie lists his classes: “Art Therapy, How to Do a Job Interview, How to Not Be High All the Time.” Ritchie’s mom’s girlfriend’s boss, a businessman and pool cleaning entrepreneur named Rude, is always worth a few chuckles when seen from Ritchie’s vantage. “There’s always enough dirty pools, leaves, and dead mice and bugs, and kids squeezing out a Baby Ruth in the shallow end to keep [him] busy.”

Answering the call for a literature that says something to young rockers about their lives, Beaudoin includes plenty of teenage rock fantasy moments, like when Ritchie dons his Les Paul in front of his bedroom mirror.

I do the Keith Richards slouch, the Billy Zoom grin, the Chuck Berry duckwalk, the My Chemical Romance dickwalk, the Eddie Van Halen finger-slam, the Hendrix teeth-pluck, the Joe Strummer low-slung, the Jimmy Page smack-daze .... Then I stop screwing around and just straight-out pentatonic air-wail like my man Joe Walsh.

Anyone who owned a guitar as a teenager can relate—or so I’ve heard.

Beaudoin skillfully bounces back and forth in time between Ritchie’s time in juvie and the events that lead to it, but the detention side of Ritchie’s experiences runs thin compared to the drama of his band, his love life, and the moment he commits his crime. Still, Beaudoin seamlessly brings it all together in the end, like the disparate members of a rock band coming down hard on the last note of the night, right before the singer shouts “thank you” and they scurry off.

Teenagers and angst go together like Les Pauls and Marshall Stacks. Luckily, rock is there for those who need a potent release from this mortal coil. If our literature doesn’t show that struggle, it’s the lesser for it. Wise Young Fool offers up a fun, fast-paced and ultimately satisfying road map for the young rocker in search of the way home.

Check out the Trailer for Stuck Outside of Phoenix the Movie, which premiered in Tempe in May 2013. 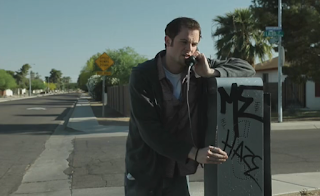