First of all, a new gig!

I will make my encore appearance at the ever-charming Uncommon Ground in Wrigleyville on Thursday, September 18 at 8 PM. I will be playing solo acoustic, and I will be featuring some new material, along with all of your old favorites, Refreshments and otherwise. I'm tempted to call this the Cubs Clinch the Pennant Show, but past experience keeps me from making such a stupid mistake. Suffice it to say you should mark this one on your calendars now before you forget and waste your Thursday night watching some inane tripe on TV.

When people ask me about being on the road with the Refreshments, I'm always ashamed at how little I remember of it. I don't want to continue the weird reverse-romanticism of the road being this awful existence. I don't think it is an awful existence. It's just that, unless you're Led Zeppelin, it's unmemorable.

Valhalla, I am coming.

I do have one very clear memory of being on the road with the Refreshments, and it seems a great time to tell it to you since it features Brian Blush, whose new band the South Slope Cutthroats has recently joined the line-up for the 2nd Annual Laying Down the Law Show on August 9th.

Flash back to the winter of 1995-96. The band had finished its debut record for Mercury, Fizzy, Fuzzy, Big & Buzzy, but the label had yet to release it. We were touring with local heroes the Gin Blossoms and Dead Hot Workshop, and we were traversing the western United States in our used-but-new-to-us Econoline van. This was to be an easy day; we had all day to drive from Seattle to Ketchum, Idaho with no gig that night. The drive was supposed to take about ten hours, but with snow in the Rockies it wound up taking about 14. We were just about to Ketchum, it was 1 A.M., when Swaff, Tempe legend and our road manager, pulled over to get some gas. Blush, who'd been sick for a couple of days, had one bench in the van to himself--I don't think I'd heard a word out of him the whole trip--and I had a bench to myself, trying to sleep a bit before Ketchum.

Everyone else had gotten out of the van except the two of us. Some clown had left the side door open, so I was getting a good dose of Idaho winter blowing in on me as I tried to sleep. I looked up to see what the deal was when I was affronted by the person at the pump across from us.

I don't know what he was doing--filling up a gas can, working with something on the ground--but in his arching over he exposed to me the largest expanse of plumber's butt I'd ever seen. 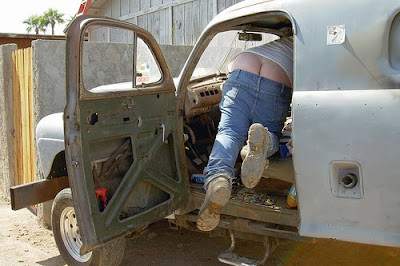 So I smiled and lay back down.

Then, seemingly out of nowhere, I heard this noise. It started as just a rumble, grew into a titter, and climaxed into a full-fledged giggle. It was Blush in the bench behind me, chortling at the bad moon rising just outside the van.

It seems silly now, but that's my most vivid memory of being on the road with the Refreshments: some Idahoan's butt crack at 1 A.M., Blush giggling like a schoolboy from the bench behind me, and me unable to keep from chuckling too. 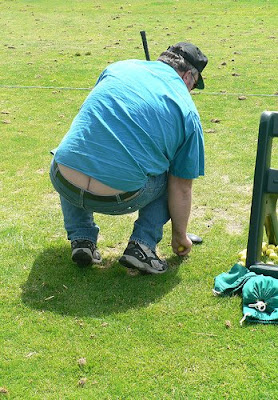 I think Brian started feeling better after that, and so did I.

Posted by Art Edwards at 1:47 PM No comments:

Email ThisBlogThis!Share to TwitterShare to FacebookShare to Pinterest
Labels: Chicagoland, Plumber's Butt, Refreshments, The Laying Down the Law Show

Last week I told you about the Laying Down the Law Show that's happening on August 9th in Lansing, Illinois.

I told you about Buck Daddy.

I told you about Art Edwards and his Defunct Band.

(Oh, actually I didn't. Art Edwards and his Defunct Band is my new Chicago-based band. The Laying Down the Law Show will be our debut performance.)

I told you about the Refreshments tribute portion of the show. (FFB&B in its entirety, baby!)

What I didn't tell you about is the fourth act on the bill.

I didn't tell you about it because I didn't know about it at the time.

I didn't know about it at the time because, well, that's just how life happens.

As of a couple of days ago, the fourth act on the bill is the South Slope Cutthroats.

Who, you ask, are the South Slope Cutthroats?

The South Slope Cutthroats are an ornery bunch of cusses who hail from Northwest Indiana.

They're also the new band fronted by Brian Blush.

Aw, hell. Everyone knows who Brian Blush is.

Brian Blush was the lead guitarist of the Refreshments.

The Refreshments laid down the law big time in their day.

So, come to the 2nd Annual Laying Down the Law Show on August 9th and not only will you get the South Slope Cutthroats, you'll also get two Refreshments in the tribute band for the price of one.

Oh my. This is starting to get good.

Email ThisBlogThis!Share to TwitterShare to FacebookShare to Pinterest
Labels: Chicagoland, Refreshments, The Laying Down the Law Show

Announcing The Second Annual Laying Down the Law Show!

We had a great time at Uncommon Ground on Friday! It was wonderful to see some old--and not so old--friends, and to play some songs solo acoustic for my new favorite city. And what a great turn-out! I'm always glad to see new faces.

If you want to hear a track from Friday, check out my MySpace Audio Page.

Rob, who came to both the Abbey Pub show in March and this one at UG, admitted he has two CDs in the visor of his car: Songs from Memory and Too Fast for Love by Motley Crue.

I have to admit: Too Fast for Love was always my favorite Motley Crue CD.

So, I'm honored and humbled.

Anyway, Chicago, thank you for treating me like family. We'll have to do it again sometime.

Randy Anderson, of Chicagoland's Buck Daddy, and I are teaming up to bring you a night of new and classic music. The date of the show is August 9th, a Saturday, and it's at JJ Kelley's in Lansing, IL, just south of Chicago. Events will include a set of music by Art Edwards and his Defunct Band, a set by Buck Daddy, and a set featuring me, Randy and a cast of musicians performing the Refreshments classic Fizzy, Fuzzy Big & Buzzy in its entirety! This is sure to be a fun night of music and memories you won't want to miss.

Last year, at the inaugural LDL show at Martyrs' in Chicago, we had a great turn-out, with lots of fun and plenty of rock to tame that outlaw inside of you. Many of the same performers have signed on for the Refreshments tribute portion of the show, including Bobby Shaw of Buck Daddy on drums, and Todd, the singer, who brings new meaning to the phrase "laying down the law" (he's a cop, folks). This is one you need to start planning on right now. I bet you won't regret it.

Posted by Art Edwards at 8:16 AM No comments:

Email ThisBlogThis!Share to TwitterShare to FacebookShare to Pinterest
Labels: Chicagoland, Refreshments, The Laying Down the Law Show

First of all, I hope to see all of you this Friday the 13th (Oooo) at my Chicago show at Uncommon Ground in Wrigleyville. The Cubs are in first, the weather is beautiful. It's the best time of the year to be a Chicagoan. Come out and celebrate! I go on at 9 PM.

And if you come, you will be the first to hear my next big announcement, which involves Chicago and laying down the law. Wanna know more? Great. I'll see you Friday.

We've lived in Chicagoland six months, and we're loving it. We spent all yesterday in the Hyde Park/57th Street area, and it reminded me of growing up in Moline, Illinois, pining to live in a place as cool as Chicago. Moline is about 135 miles west of the big city, and I always thought I'd eventually wind up in Chicago, drawn there by the Cubs but staying for something else. I wouldn't have been able to say what, but yesterday driving up Lake Shore Drive I realized what it was.

The place is big enough and diverse enough to allow for just about any whim to be satisfied. If it's available anywhere, it's available here. Need to buy a used PA system? No problem. Wanna jog the lake front? Check. How 'bout see a new movie that didn't cost a billion dollars to make? Yep. Wanna catch Wilco? Play an open mic? See classic artwork? Eat Lebanese? Browse an independent bookstore? You have it all, usually ten times over. If you're willing to put up with a little stop-and-go on the freeway, you can do anything you want.

That's something relatively new for me. Five years in Ashland, Oregon, which is at least four hours away from any big city, got me used to dealing with the limitations of being so isolated. Now it feels like there's so much to do. It's a little overwhelming.

And it doesn't hurt that the Cubs are here, either.

Come see me on Friday!