First of all, this will be my last blog for a few weeks. My wife and I are moving across the country to the Chicagoland area, and getting a blog down once a week becomes impractical during a move. You can bet I’ll chime in sometime in December to tell you about all the cool stuff coming down the chute relating to Ghost Notes and Songs from Memory. Again, both book and CD have instore release dates of March 4, 2008, but you can count on pre-release sales to start at my Web site, www.artedwards.com, a month earlier, on February 4, 2008.

To continue from last week, here's the Refreshments' one and only appearance in Rolling Stone. Click on it to see a bigger version. 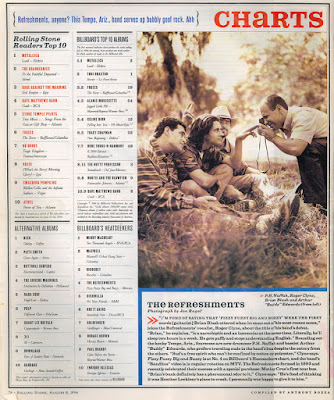 This appearance was the result of the band inexplicably coming in at number two on the Rolling Stone Readers' Poll conducted the month previous. (You can see that current month's readers' poll on the left of the image.) This surprise showing happened because the poll that month was conducted only in the Rocky Mountain states, and Denver and Phoenix were our two biggest markets. (Thanks again, Phoenix and Denver.) Anyway, Rolling Stone felt it was big enough news to send a photographer out, and we spent an entire day in Santa Barbara taking pictures. I've always liked this shot.

Here's a bigger version of the content from the scan above. 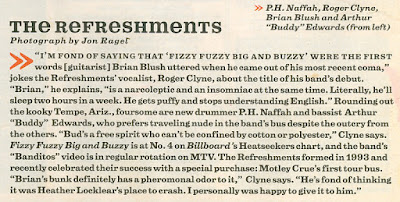 For the record, I never rode nude on the bus, but I was and continue to be a free-spirit. 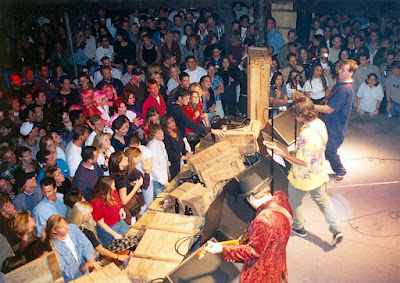 This is taken at the Cajun House (I remembered, Brian) in Scottsdale, and seems to be a typical Scottsdale show--a lot of people looking at you and you looking back. From this, you get a good idea of the characters we played onstage: Brian in his Vegas lounge jacket, Roger in Hawaiian get-up, and Bud ready to work on your car. Absolutely no thought went into these concepts. We were all hams and wanted to be noticed; the rest developed naturally. 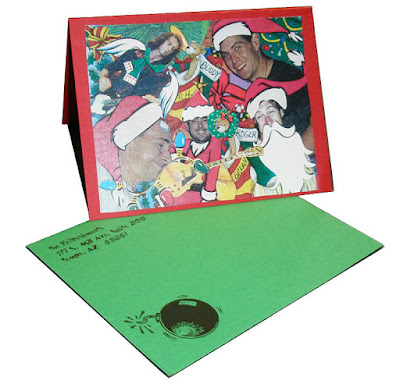 This was one of the many extras put together by Doug and Kathleen Kramer for our mailing list. Even though the Internet was up and running, our only direct communication with our fans was through these mailings. Kathleen sent out other things, too, like cards announcing tour dates and reminders of new records coming out. It was one of the best aspects of being a fan of the band, I think, getting these things in your mailbox here and there. Doug and Kathleen handled all of it. Thanks Doug and Kathleen!

Again, many thanks to Brian J. Henderson for the photos.

And thanks, everyone else, for reading. Fun, huh? We’ll chat more in December!

The release dates for Ghost Notes and Songs from Memory are set. Both have in-store release dates of March 4, 2008. You can count on pre-release sales to start at my Web site, www.artedwards.com, a month earlier, on February 4, 2008.

Many promotional events in many different cities are being planned, so don't be surprised if I'm in your neck of the woods in 2008. Stay tuned! 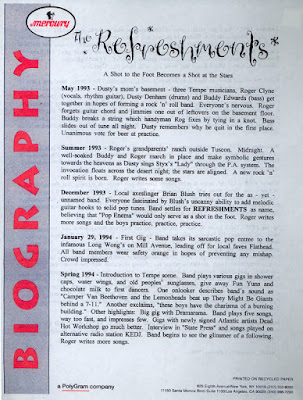 Here we have a bio that I, with the help of the other band members, concocted at some point in 1995 to impress record execs. I'm pretty sure this effort was prompted by Marcy Drexler, who was a talent scout for ASCAP and who went way out of her way to help the band find a label early on. Click on the image to get a view you can read. You will see we still hadn't shed our silliness, or at least I hadn't.

This doc gives you a little more insight into things like our first practice, the infamous ranch trip, and Blush joining the band, all of which have been chronicled in more detail at this blog. Click the Refreshments tab on the right hand side of this page to see all Refreshments-related blogs.

There is a reference to our first big gig, leading off for Dramarama at Gibson's in our first few months of playing out. For the record--and don't expect too many admissions like this from me because I think people sometimes get the wrong impression--this is the gig that I fictionalized on Day Three of Hote's journey in Stuck Outside of Phoenix. The band in the book, Bluebottle, was simply Dramarama for a long time. 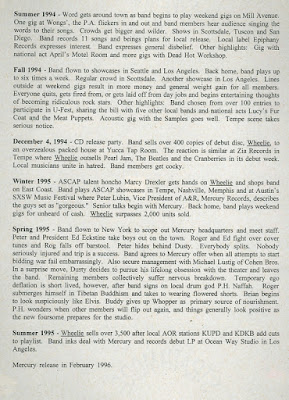 Again, a retelling of the night the P.A. flickered in and out, and the night of our record release.

Epiphany Records was a local record label started by Zia Records owner Brad Singer. We weren't actually "signed" to Epiphany, but both the band and Brad benefited by being associated with each other--and we liked Brad--so the record was made to look like it was released by Epiphany. Singer supplied the bar code and the Epiphany logo, I remember, and we did the rest.

For some reason, we left out any mention of Ticketmaster in our bio, choosing instead to note our "showcases in Seattle and Los Angeles." I'm guessing this is Vedder-related, but I'm not sure. It definitely wasn't cool to be associated with Ticketmaster back then.

But you'll notice we outsold Pearl Jam in our Wheelie debut at Zia. Zia used to print off their Top 25 every week and would have the sheets sitting on the counter. It was pretty thrilling to see our names above Pearl Jam and some other bands. We were starting to understand where this thing could lead, and we were ready to follow it.

I'm going to avoid talking about 2005 just yet, since I haven't covered it in the blog, but I think you can see where we're heading. You can expect me to expand on some of these items in later blogs.

Many thanks to Brian J. Henderson for the scans. We'll have more from his collection next week.

The release dates for Ghost Notes and Songs from Memory are set. Both have in-store dates of March 4, 2008, just four months from today. You can count on pre-release sales to start at my Web site, www.artedwards.com, a month earlier, on February 4, 2008.

Many promotional events in many different cities are being planned, so don't be surprised if I'm in your neck of the woods in 2008. Stay tuned!

And many thanks to Brian J. Henderson for the new profile picture. Brian has kindly supplied me with many Refreshments-related scans from his collection, and we’re going to talk about some of them over the next couple of blogs.

Also, does everyone understand RSS feeds? (Don’t be embarrassed. Gerke just filled me in yesterday.) It’s an easy way to keep up with what I post here. Just look for the little orange and white icon, click it, and choose your option.

So Wheelie came out on December 4, 2004 (Funny, the 4th seems to play into a lot of the album releases of my life. See above.) There was some uncertainty regarding what weekend it would come out. We promised to premier it at the Yucca, so our staunchest fans would be the first to own it. We kept saying, “the fourth or the eleventh,” to anyone who asked about the CD. We were all listening to it in our cars and at our homes, proud as hell, waiting for the CD manufacturer to get our product done so we could start selling it. Finally, they came in, unassembled, from the manufacturer, and Kel, Rog and I spent one weekend putting 1000 of them together.

One of my best memories of being in the Refreshments was walking into the Yucca on December 4, 1994. It was early, but the place was already pretty full. I’d guess there were about 100 people there. I came in with my big box of 200 CDs, and 100 sets of eyes followed me, hungry lions honing in on some guy carrying a lamb shank, as I walked through the room and sat down at the far booth. A line quickly formed that extended all the way to the other end of the bar. The first guy in line dropped a stack of bills on the table, looked at me with blood-shot eyes and said, “Give me 15.”

That day, we sold 411 copies of Wheelie, and we would never look back. We actually had to run back to my place in between sets to get more boxes.

It was a dream-come-true, and that day will always be the apex of 1994--and in many ways the apex of the Refreshments--to me. The road ahead would lead us to great victories, but also would be fraught with difficult decisions and hard-to-swallow compromises. With Wheelie, it was all pure. We handled everything ourselves, and we succeeded on our own. There was no reason to believe we couldn’t have continued on in that way--making records and selling them out of the back of my pick-up truck--but none of us wanted that. We were destined for something else, and by the end of 1994 we were ready for it.

You’re going to hear many different numbers of how many copies of Wheelie are out there, but most of them are false. Here’s the truth, as remembered by the guy who managed the entire project.

The band ordered Wheelie in batches of 1000, but we usually got somewhere in the area of 1050-1100 in each batch, the extra being printer over-run. We placed a total of five orders, which means there are no more that 5500 copies of Wheelie in existence. We sold most of those, but we gave a lot of them away, too. Still, 5500 copies are floating around out there. It’s not impossible to score one of them, even in 2007.